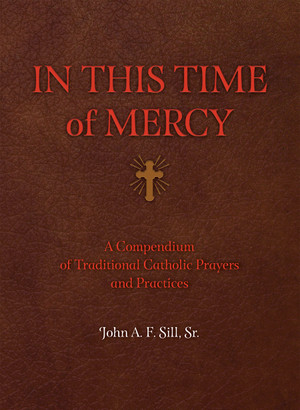 In This Time of Mercy (Hardcover)

After a thirteen-year absence from the Catholic Church, John A. F. Sill, Sr., found his way back, experiencing what Saint Maria Faustina Kowalska called “the time of mercy.” As he became reacquainted with his Catholic faith, he collected free prayer resources at Holy Rosary Parish and created his own book of devotions.

Now Sill has shared his collection—and his eagerness to live a holy life. He has included many of the Catholic prayers and devotions that have helped him with his personal prayer life, some of them well-known and others rediscovered by him on his personal spiritual journey. The book is divided into ten major sections, each containing a wealth of prayer resources:

“I hope you discover, as I have, that God’s mercy is poured out on all who wait on him. With Saint Teresa of Jesus, I hope you discover that prayer is ‘a door that opens up into the mystery of God’.” from the Introduction by John F. A. Sill