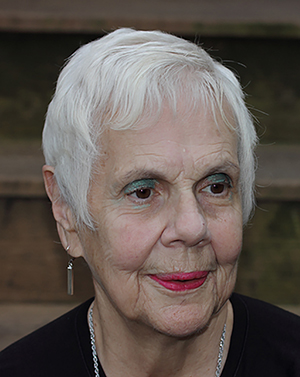 Helen Reichert Lambin grew up in Iowa, which will always be a part of her, but has lived in the Second City for decades. It was here that she met her beloved husband, Henry Lambin, now deceased, the inspiration for the book, Death of a Husband. She has been wife, mother of three (Joe. Rosemary, and Jeanne), mother-in-law or almost (Suzette, Skip and Scott), and grandmother of one, Jessica. She has also been pet companion, and writer (all willingly), worker (willingly and otherwise), and widow (very unwillingly). The worker part has included secretarial, copywriter, casework, program coordinator/event planner, and occasional film extra. Her writings have centered on loss and transition during times of difficulty and change. This is probably because she would like to find some salvage value in experiences she’d much rather not have. Currently, while working at recovering from a badly broken arm and subsequent surgery, she rather crossly asks what she is supposed to learn from this mess—and would prefer easier ways to learn whatever it is. She hasn’t written about this—yet—because writing is, alas, physically challenging right now. When life is more normal, ordinary, and delightfully dull, she likes to garden, read, knit, travel, learn bits of languages—and write. In addition to Death of a Husband, Helen is the author of short articles on transition and loss, baseball, and travel, and the books From Grief to Grace and Prayers for Sleepless Night. And she spends a lot of time awake.