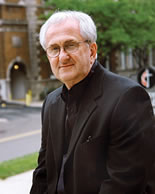 Currently Writer in Residence at John Carroll University, this pastor, professor, and author is a noted national and international commentator on religious and cultural issues, especially those relating to the sexual and financial crises gripping the Catholic Church. The New York Times says,"…Donald Cozzens…is one of the most-respected moderate voices on Catholic issues…" (February 13, 2011). He has appeared twice on Meet the Press, (March 31, 2002, and June 16, 2002) and has been interviewed on Fresh Air, All Things Considered, The Australian Broadcasting Corporation, BBC radio and television, CNN, and the major television networks.

Cozzens’ award-winning and best-selling book, The Changing Face of the Priesthood, has been translated into eight languages, including Korean. His subsequent books include the award winning Sacred Silence: Denial and the Crisis in the Church; Faith That Dares to Speak;  Freeing Celibacy; Notes from the Underground: The Spiritual Journal of a Secular Priest;and  In 2015, Cozzens’ award winning first novel, Master of Ceremonies, was published by ACTA/In Extenso.

A priest of the Diocese of Cleveland, Cozzens has lectured throughout the United States and in Ireland, England, Australia, Columbia, and India.