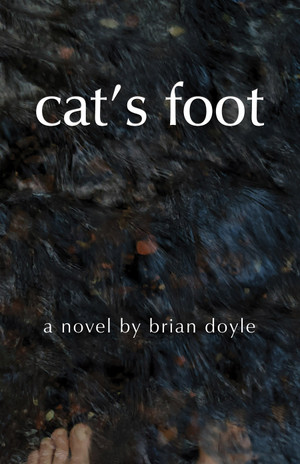 What if a man who lost his foot in a war decides, many years later, to find it? "It was a good foot, and we parted so hurriedly I never had a chance to really think about it as a foot, so off I went..." So begins this lean little novel a quest, a wandering, a contemplation of the immense foolishness of war. Terse but filled with adventure and wonder, Cat s Foot is surely the most unusual fiction you will read this year or perhaps any year...

Brian Doyle was a hirsute shambling shuffling mumbling grumbling muttering muddled maundering meandering male being who, until his untimely death in 2017 at age 60, edited Portland Magazine at the University of Portland in Oregon—the “best university magazine in America,” according to Newsweek, and “the best spiritual magazine in the country,” according to author Annie Dillard (clearly a woman of surpassing taste and discernment). Doyle was the author of many books, among them collections of essays (including Grace Notes, So Very Much the Best of Us, Reading in Bed, and One Long River of Song), nonfiction books, (including The Grail and The Wet Engine), collections of poems (including Epiphanies & Elegies and Thirsty for the Joy), and novels (including Chicago, Mink River, The Plover, Martin Marten,  and The Adventures of John Carson in Several Quarters of The World).

“My friend Cat lost his foot in a swamp during a war.” That’s how the narrator begins the story of Cat, the title character in this novel by well-respected and recently deceased writer Brian Doyle, the former editor of the magazine of the University of Portland, run by the Holy Cross Fathers.

Cat returns to the country of the war years later in a remarkable search for his lost foot. We make this journey with him, and he asks us from time to time, “Do you know what I mean?” And somehow, we do.

We’re there as he inquires after his foot from the people he meets and as he steadfastly and unquestioningly follows the directions in which they point him. We search the fields with him and hear the thoughts and questions he asks of himself, of the other memorable characters he encounters, and—always—of the reader.

Cat shares with us his thoughts on war, on cruelty, on his father’s thoughts on evil and love; and his memories of how he met his wife, the day he saw a religion being born under a tree, and other magical things. We learn that he thinks some things people say are “silly talk.”  We are on this search with him—walking through a field or a town or climbing a mountain or sleeping in a cave or being unjustly accused, arrested, and jailed. We chuckle at the sight of him accepting a ride on the back of the “chicken man’s motorcycle” with 100 chickens and then sharing a meal in the man’s home afterwards.

Cat’s sense of wonder and generosity delights us. And some of his ruminations uncover quite philosophical, and even theological, insights and values. The cruelty of war has not been forgotten: “I tell my boys (his two sons) that clean water is the second most important thing in the whole world, after kindness.”  Many passages like this challenge us to find and speak our own wisdom.

We always end up walking with Cat, this man without a foot (or a last name), who paradoxically walks always and everywhere. It’s a walk with an unusual rhythm that keeps us moving and engaged—which, when you think about it, is so like how most of us experience life.

“Along Cat’s implausible journey to find something impossible to find, you hear him say things you never heard before, told in ways that make you marvel. Cat’s eyes have seen everything, it seems. Forgotten nothing.”—Bill Gunlocke, editor, a city reader

"Such a tiny book in this era of epic tomes, and yet, it is perfect and complete. As one who grew up under the shadow of the Vietnam war, I found Cat's Foot a comforting way to bring some closure to that time. The book never says it takes place in Vietnam, so it could be about other wars, but for me it was about seeking resolution to all that was lost in those times. Beyond the story itself, Brian Doyle's writing never ceases to uplift me. Among many wonderful descriptions is this most perfect capturing of how one person can nourish another just by being: "She was a good person to have entered your life, whether or not she stayed in your life. I felt better myself, a little deeper, like I was a lake and she was good rain and now I was a little bigger lake." Reading Brian Doyle always leaves me a little bigger lake."—Five-Star Amazon Review

"Along Cat's implausible journey to find something impossible to find, you hear him say things you never heard before, told in ways that make you marvel. Cat's eyes have seen everything it seems. Forgotten nothing.—Bill Gunlocke, Editor, A City Reader

"This small gem of a book gives the reader much to think about on the nature of war, human nature, forgiveness, healing, and matters of the heart. I highly recommend it."—Cindy Hudson, Mother Daughter Book Club