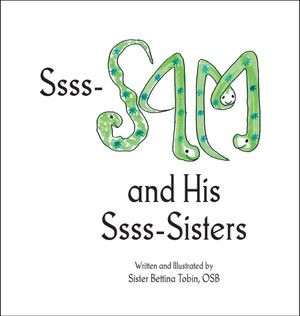 Sue, Sis, and Sal were a little worried because most of the things Sam worked on didn’t turn out too well. But Sam was great at wrapping gifts for Mother Snake, and so he became his sisters’ hero.

Author and illustrator Sister Bettina Tobin was born and received her early education in northwest Missouri. After graduating from Mt. Scholastica Academy and College, she did graduate work in several universities. After thirty years of teaching in elementary and secondary schools in the Midwest, Sister Bettina devoted twelve years to working with the poverty-stricken illiterate people of the state of Bahia in northeastern Brazil. She found it a humbling experience to teach children and adults to begin to read pictures and then, little by little, to connect the letters and words. When books were worn out with continual use and because supplies were limited, she decided to write her own.