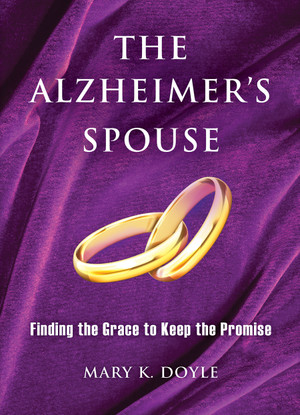 Only the spouse of someone suffering from Alzheimer’s disease will completely appreciate this book.

Alzheimer’s spouses are asked to keep the marriage vow to love their husband or wife—despite the physical and emotional ravages of the disease—”until death do us part.” In this timely and specific book, journalist and author Mary K. Doyle, whose husband of almost a quarter of a century suffers from advanced Alzheimer’s and no longer even recognizes her most of the time, gives gentle advice to other Alzheimer’s spouses about what is in store for them and how to deal with their beloved soulmate in loving and practical ways while still protecting their own health and happiness.

As she writes in her first chapter:

We begin our marriage with a covenant, an agreement that will bind us with our spouse through the good times and the bad times. Few of us, however, reflect much about the implication of the vow to have and to hold in sickness and in health. We are often young. We are beginning a joyful new life. We realize there will be unhealthy days somewhere in the future, even expect them. But we are never prepared for the terrorist known as Alzheimer’s disease, which may even have been an uninvited guest at our wedding. It was at mine.

For each of the subchapters in this book, Doyle offers spouses of Alzheimer’s patients bulleted suggestions for “What We Can Do” on specific issues at different stages of the disease. As she reminds her readers:

Happiness is a choice, in many ways. There’s beauty, love, and support around us. We only have to reach out and grasp it. We find ourselves in the midst of what is almost certainly the most trying time of our marriage. When we are exhausted and frustrated, it can be easy to overlook the small joys in our life—the joys both within and beyond our spouse. If we must live with hardship, we should also enjoy these gifts.

Mary K. Doyle is the author of ten books, including the award-winning Navigating Alzheimer’s: 12 Truths about Caring for Your Loved One. She cared for her husband, Marshall Brodien, for over ten years at home after his diagnosis of Alzheimer’s and now visits faithfully in the extended-care facility in which he now lives. She speaks regularly around the country on “finding the grace” to be the primary caregiver of a loved one with Alzheimer’s.

When Caregiving Is a Lifetime Commitment
Books from religion publishers help those caring for spouses or parents who are ill
By Lynn Garrett
May 17, 2019

Some baby boomers might secretly have believed they would be eternally young, but they are growing older after all and are now facing the physical decline and losses that come with aging. Many have or will become caregivers for parents or spouses, and there are a notable number of books—especially from religion and spirituality publishers—that aim to guide and inspire them as they face some of life’s toughest experiences.

Of all of the ailments that can afflict older people, perhaps the most feared is Alzheimer’s disease. The problem looms large: according to the Alzheimer’s Association, approximately 5.8 million Americans are living with Alzheimer’s, and more than 16 million Americans provide unpaid care for people with Alzheimer’s or other forms of dementia. As medical advances keep people alive longer, the demands on caregivers become even more complicated, and books now address the practical, emotional, and spiritual challenges they face.

Caregivers are often husbands or wives, and in The Alzheimer’s Spouse: Finding the Grace to Keep the Promise (ACTA, out now), Mary K. Doyle writes of struggling to care for her husband, Marshall Brodien. A magician best known for his character Whizzo on The Bozo Show, Brodien first showed signs of the disease 15 years ago, and since then Doyle has wrestled with both its practical and spiritual aspects. “Caring for a loved one with Alzheimer’s requires us to act selflessly,” she writes. “No matter how painful, we must put our own feelings aside.”

Doyle asks and answers one of the most painful questions for her and many other caregivers: how can a wife or husband remain committed to their vows when the person they married is no longer there? Few couples reflect on the implications of promising to stick together in sickness and in health, she writes; “We realized there would be unhealthy days somewhere in the future, even expected them. But we never prepared for the terrorist known as Alzheimer’s disease, which may even have been an uninvited guest at our wedding. It was at Marshall’s and mine.”

Doyle, a journalist and author, published a book in 2017 for all caregivers, Navigating Alzheimer’s: 12 Truths About Caring for Your Loved One (also from ACTA). In The Alzheimer’s Spouse, she delves into issues specific to couples, including the effects of Alzheimer’s on sexuality, finances, and the caregiver’s health, as well as the guilt and loneliness that come with watching as the mind of one’s beloved spouse slips away while their body lives on. Her faith supported her in caregiving, Doyle writes, quoting a prayer traditionally attributed to St. Francis of Assisi: “Grant that I may not seek so much to be consoled as to console; to be understood as to understand; to be loved as to love.” Marshall Brodien died as The Alzheimer’s Spouse was going to press; Doyle hopes the book will comfort other caregivers who suffer the predations of the disease.