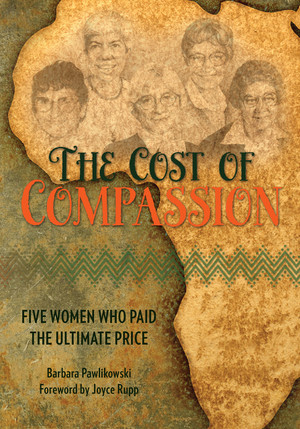 The Cost of Compassion

In 1992, five American missionary sisters, members of the Ruma, Illinois, Province of the Adorers of the Blood of Christ, were murdered by soldiers during a civil war in Liberia, West Africa.

This is a story about women wmho promised to dedicate their life to serving others. The women portrayed here, Sisters Barbara Ann Muttra, Shirley Kolmer, Mary Joel Kolmer, Agnes Mueller, and Kathleen McGuire, displayed a unique courage, competence, and commitment in their missionary calling. But they were also funny, joyful, intelligent, stubborn—and, yes, afraid.

You will want to read about these relatively unknown American martyrs…

In her new book, The Cost of Compassion, Barbara Ann Pawlikowski brings to life these ordinary women. Her book paints a picture of them not just as glorified martyrs to the faith, but as real-life women who cared deeply about their vocations and the people with whom they worked. These women were heroes not because they were willing to die, but because they were drawn by their faith to minister to those who needed it most, despite the danger and personal sacrifice required. This well-researched and powerful book is a must-read for anyone who wants to learn more about these little-known women. — Emily Sanna, associate editor, U.S. Catholic

Praise for The Cost of Compassion

The Cost of Compassion is a well-spring of healing for all who still carry within us the traumas and scars of war. This book is a great contribution to the healing and reconciliation of my beloved Liberia—an ideal still very distant. — Most Reverend Tony Borwah, Bishop, Catholic Diocese of Gbarnga, Liberia, and President, Catholic Bishops Conference of Liberia

By her excellent portrayal of intimate details of the lives of five selfless American women who came to be swept up in a horrible war in a tiny African country 25 years ago, Barbara Pawlikowski re-energizes the hope their murderers will be brought to the bar of justice. — Gerald S. Rose, Former Deputy Chief of Mission, U.S. Embassy in Liberia