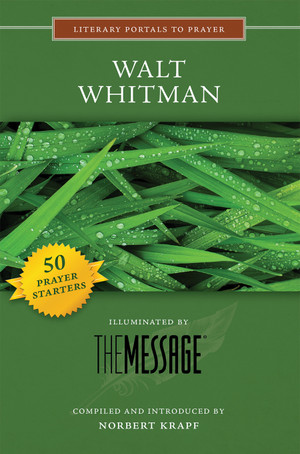 Walt Whitman, Illuminated by The Message

A revolutionary way to pray for modern times.

On one side is a bible verse from The Message by Euegene Peterson and on the other side is a relevant excerpt from a classic author. Think of it as a literary lectio divina.

Walt Whitman—free-verse avant-gardist, prophetic visionary, bohemian, nature-lover, spokesperson for the common man and woman. The Walt Whitman at the center of this book brings us along on the spiritual journey of his evolving self. The Whitman who speaks as a joiner of all people and things is conjoined at his spiritual center to Whitman the loner.

This book is the perfect gift for fans of Whitman, as well as those who have yet to discover some of his writings, and will serve as a welcome resource for those seeking a way to reignite their prayer life.

Excerpts include the following poems from Whitman’s Leaves of Grass: “Song of Myself,” “Look Down Fair Moon,” “Passage to India,” “The Mystic Trumpeter,” “Reconciliation,” “Transpositions,” and “When Lilacs Last in the Dooryard Bloom’d.”

“I recommend this series as a great resource for those seeking to enhance their prayer life—just start with your favorite author.”—John Molyneux, Editor-in-Chief, U.S. Catholic

Norbert Krapf received his M.A. in English from the University of Notre Dame and also his Ph.D. in English and American Literature, with a concentration in American Poetry. He taught at the C. W. Post Campus of Long Island University 1970-2004, where he is now emeritus Professor of English, was Poet Laureate 2003-2007, and directed the C. W. Post Poetry Center. He twice served in Germany as a Senior Fulbright Professor of American Poetry, at the Universities of Freiburg and Erlangen-Nuremberg. He was also a U.S. Exchange Teacher at West Oxon Technical College, England. In June of 2008, he was appointed to a two-year term as Indiana Poet Laureate, in which capacity he continued his efforts to reunite poetry and music, brought Indiana poetry to TV and radio, give readings and talks in libraries and other venues, and visited schools to share with students his enthusiasm for reading and writing poetry and prose memoir. Norbert Krapf has written or edited 25 books, two of which are his translations from the German. Nineteen of these books are collections of his own poetry, including Somewhere in Southern Indiana: Poems of Midwestern Origins (1993), Blue-Eyed Grass: Poems of Germany (1997), and Looking for God's Country (2005), all available from Time Being Books, and Bittersweet Along the Expressway: Poems of Long Island (2000) and The Country I Come From (2002), sixty poems set in Indiana. http://www.krapfpoetry.com/