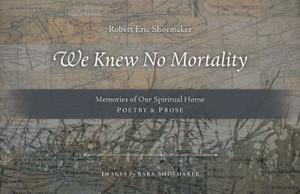 We Knew No Mortality

Robert Eric Shoemaker’s We Knew No Mortality is a coming-of-age in every sense of the phrase. The book marks the poet’s discovery of his vocation as a writer, a reckoning of his place in his family history, and a questioning and coming to terms with his childhood Catholic faith. In all of these aspects of the narrative, Shoemaker’s small-town Kentucky home is vividly conjured and becomes a central character of the story itself. Through its moving blend of lyric poetry and prose, the book invites the reader into a particular kind of family memory passed down from generation to generation, not only through its evocative writing but also through the artful presentation of photographs taken or selected by the author’s cousin, Sara Shoemaker, an accomplished visual artist in her own right. A gift both for the spiritual seeker and the aspiring artist, We Knew No Mortality rewards multiple readings with its thoughtful exploration of personal transformation.

“Memory inhabits the present in these poems,

even as it suggests a new way to exist in it.”

“Hope matters, as any tender boy from a small town will tell you.”

“With compassion and insight,

Shoemaker considers his heritage and landscape,

the ‘comfort and problems peculiar to the rural,’

and the nature of spiritual homecoming.”

“A memory quilt sewn with spells, floods, and pink wounds.”

that is like the tree trunk of a family tree,

Robert Eric Shoemaker is a poet-playwright, educator, and theatre artist born and raised in Henderson, Kentucky. He is presently an MFA Candidate in Naropa University’s Creative Writing & Poetics program at the Jack Kerouac School of Disembodied Poetics.

Eric is the Founding Editor of Beats: A Naropan Periodical. Since its founding in response to the U.S presidential election of 2016, Beats has published 4 issues including 2 chapbooks, dozens of online pieces, and orchestrated two activist readings and one production at a major venue: “HOWL: A Ginsberg Birthday Party” at the Fox Theatre in Boulder, Colorado. Over twenty acts were performed at the Fox for this event, for which Eric and Beats were the main producing entity. Beats received a $1000 grant from the Awesome Foundation to fund the “HOWL” production.

Eric is also the Founding Artistic Director of Poetry Is Productions, a theatre and arts company responsible for over four years of work in Chicago, New York, and Boulder. Several of his own plays and work by other writers, including Catherine Theis, have been featured by Poetry Is Productions. Eric is also the author of the duet musical “PLATH/HUGHES,” which was awarded the 2014 Olga and Paul Menn Foundation Prize for Best Play and has been produced by Poetry Is Productions in Chicago and New York City. His project “Lorca In America” was awarded a 2015 DCASE Individual Artist Program grant from the City of Chicago and featured the production of his original translation, “Bernarda Alba and Her House,” at Redtwist Theatre.

Eric’s journalism has been published in Turnout: A Poetic Journalism Zine; Boulder Weekly; Newcity; Evanston Now; Fra Noi Magazine; Artisan Magazine; Printeresting; VAM; and through the Pulitzer Center on Crisis Reporting Campus Consortium Fellowship, which sent him to Venice to cover his own project, “Venetian Artisanship and Climate Change.”

Eric is a graduate with honors and a student marshal from the University of Chicago, where he was Artistic Director of the Classical Entertainment Society. Follow his work at reshoemaker.com.

We Knew No Mortality is a memory quilt sewn with spells, floods, and pink wounds. Shoemaker’s words shed to reveals themselves like a creature in crystallized grass-flats. This book is more than just a book. It’s a shared cigarette behind the boiler room. It’s a song for America-forgotten. —Sarah Escue, author of Bruised Gospel, editor at The Adirondack Review

As the first section of We Knew No Mortality suggests, in these poems, at once elegant and welcoming, there is a recurring theme of the latent emerging, the ghost manifesting. Memory—inherited and personal—overlays the present, Jesus returns to wash us white as snow, capitalism reaches its culmination and fails. But latent potential and promise also surface and are realized, or at least the reader hopes for this. And hope matters, as any tender boy from a small town will tell you. The poems travel in a steady pace from Henderson, Kentucky, to Rome, to Chicago, and all the while we are reminded by these varied yet centered poems of how home is always present, even as the details of one’s life shift. —J’Lyn Chapman, author of Beastlife

In We Knew No Mortality, Robert Eric Shoemaker travels back to his “ole Kentucky” town with Wally World and walks down memory lane. Here, family yarns of money buried in fruit jars and crucifixes sacrificed to storms coexist with a drug trip, retreat to Italy, and return to a sanctified self. With compassion and insight, Shoemaker considers his heritage and landscape, the “comfort and problems peculiar to the rural,” and the nature of spiritual homecoming. He writes: “I wipe my face in the mud. I can see my reflection.” Read this book and follow his lead. —Gabrielle Civil, author of Swallow the Fish

This gifted poet reverently unwinds the tight scroll that is like the tree trunk of a family tree, unrolling this sacred scroll that reveals living map, hymnal, inheritance of memory. Opening and opening to find the deep core “in a solace of pine,” as mythic charms like old family story go chiming through the blood in song. Such spells of dry earth into songs of water! The family story Shoemaker is remembering, is in his blood that is like a song in the body, “a spark that fell out of a bonfire.” Not within the cage of a photograph can one locate the nature of self; rather, here is the breathtaking primer for reading one’s history by “earth-light”: “I wipe my face in the mud. I can see my reflection.” It is in the fountain erected in his hometown where Shoemaker will frolic at the source: “I remember this fountain / Going up / The first time / And playing in it.” This collection is meant to be sung! In the root dreams of the tree that was and the tree that is still becoming, and down deeper still, in the “stream beneath the water,” the underground waterfall of family music where it issues forth from the tap of a cistern, the underground reservoir concocting legends of love and sorrow—I shall never tire of visiting this sacred place. In my very favorite poem, I hear in the flood of folk song the voice of the immortal family, from family grove to groves of antiquity, come to serve us mirth, lullaby, and compassion: “You’re swimming with me in Kentucky / as I drown in the sediment of an ancient suburb. / I am drowning while you fight through bluegrasses. / I am drowning when you get to my side, breathlessly. / You gather me in your arms.” —J essica Savitz, author of Hunting is Painting

“Basketball dreams, / Or grander, even, / Leavin’ plows for town, / leavin’ empty silos,” Shoemaker closes the poem titled “Corn Festival, 2015” in a tone characteristic of We Knew No Mortality. There are blues in the grass of this Kentucky landscape, and there are blues in the speaker’s throat when he leaves it. An “outsider, an outlier,” he becomes strange to himself in pursuit of grand dreams, even as those left behind become clearer with distance, including Sammie-Jo, presiding from her couch throne, and Carl-Ra, burying fruit jars full of money. Memory inhabits the present in these poems, even as it suggests a new way to exist in it. —Amy Wright, author of Cracker Sonnets and Everything in the Universe, Nonfiction Editor, Zone 3 Press