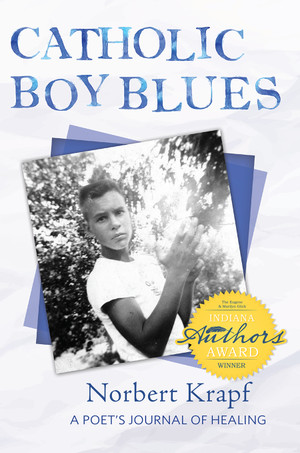 Norbert Krapf, past Indiana Poet Laureate, Pulitzer Prize nominee, emeritus prof. of English at Long Island University, and author of twenty-five critically acclaimed books, has written a new book, "Catholic Boy Blues: A Poet's Journal of Healing." Norbert is a survivor of childhood sexual abuse. After fifty years of struggling with his past, he felt that by confronting it in writing, he could offer fellow victims comfort, healing, and a sense of freedom from the long-term effects of abuse. He also believed that the book, seven years in the making, could help caregivers who counsel and minister to survivors of abuse.
"Catholic Boy Blues" gives insight and encouragement to those who have not yet confronted their abuse and to friends and family members who want to understand better the long-term effects of abuse. After Norbert began to write about the emotional turmoil which affected him, his feelings of betrayal by God and Church, and his years of troubled silence, he experienced healing and a renewal of spirit. The 130 poems he selected from the 325 he wrote came in four voices: the boy he was, the man he became, Mr. Blues (a fictional friend, mentor, and counselor), and the Priest.
The honesty and power of Norbert's words convey representative emotions and thoughts of those abused. Although the poems aren't always pleasant, they give the reader a vivid look at the helplessness, anger, betrayal, and isolation any victim suffers, but in the end, as Jason Berry says, "Norbert Krapf fuses the rolling wisdom of blues singers with incantations of his own past that echo sacred ritual. Along the way he turns trauma into elegy, and takes suffering to a plateau of human triumph."
Praise for Catholic Boy Blues