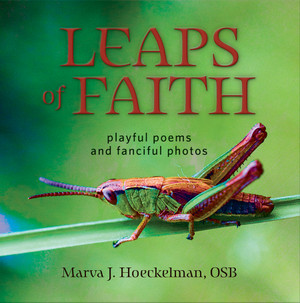 Here is a wonderful, quirky, faith-filled book of playful poems and fanciful photos — her first ever — by Sister Marva Hoeckelman, OSB, depicting contemporary monastic life in the middle of America using imaginative creation and personal experience aimed at shaking up some of the stereotypes of vowed religious held by many in secular society. It includes but is not limited to humorous character descriptions, experiences while enjoying the outdoors, and personal encounters with God.

It is not often that we receive such an entertaining glimpse into a life that few of us in the secular world ever see firsthand. This collection is organized around the Liturgy of the Hours — the monastic timetable for prayer — because, simply, that is the framework of Sister Marva’s daily life. You will become familiar with the monastic prayer divisions of Matins, Lauds, Terce, Sext, None, Vespers, and Compline, which correspond roughly to dawn, morning, mid-day, afternoon, early evening, late evening, and night time respectively. Sister Marva writes from the perspective of 25-plus years in the contemplative life. Nonetheless, as a later-in-life vocation, she also has the experience of someone familiar with the common struggles of those of us “outside the walls.” — Judith Valente, from the Foreword

About the poet and photographer

Sister Marva J. Hoeckelman, OSB, wrote her first poem at the age ten and this first book of poems sixty years later. Between the two she received a degree in English from the University of Missouri-St. Louis and a degree in elementary education from Mount Marty College, attended Iowa Summer Writing Festivals, and worked in several jobs in Missouri, Nebraska, and South Dakota. Recently her prioress at Mother of God Benedictine Monastery in Watertown, South Dakota, released her from her day job so she could spend full time on her writing—when she is not sitting in her favorite chair, as pictured above, that is.