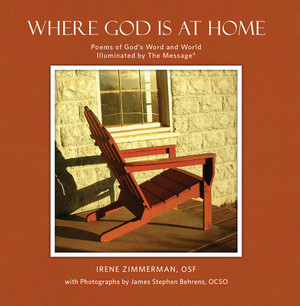 Where God Is at Home

Why is God represented on the cover of this book of poems with a photograph of an inviting empty chair bathed in sunlight?

Because Franciscan Sister Irene Zimmerman is about to fill that chair with poetic images of God from both the Word and the World, her verses illuminated by passages from Eugene Peterson’s The Message and photos by Trappist Father James Behrens.

As she writes in her Introduction, “More than a dozen years ago I had the strong desire and determination to write and present, in one volume, poems that celebrate Scripture and Creation—what medieval theologians referred to as God’s two ‘books’ of self-revelation.” Part One contains poems inspired by scriptural stories, characters, and events intended to help the reader imagine the scene and perhaps gain new insights into the biblical texts. Part Two contains poems of God’s creation, where humans first encounter God.

“I began to experience something of the God-Mystery on the Iowa farm where I grew up,” Sister Irene explains. “Breezes rustled the drying corn or moved across fragrant hay fields. Plants rooted, sprouted, bloomed, gave fragrance in spring and food in autumn in the form of apples, cherries, peaches, potatoes. The animals sharing the turf with me offered eggs, milk, butter, meat. They used their unique voices—they peeped, clucked, crowed, squawked, chirped, mewed, barked, mooed, whinnied, snorted—to tell me of God’s creativity, generosity, humor, beauty.”

Sister Irene Zimmerman has learned to “see like sun,” as she prays at the end of her poem “Solar Graffiti.”

If I could learn to see like sun
I too would move around the world,
drawing peace on every wall
till earth was one.

And now she shares that experience with all of us.

Early in her teaching career, Irene Zimmerman, OSF, was encouraged by a sister-colleague, herself a poet, to work at developing her God-given gifts. And work she did, publishing five volumes of poetry and presenting her poems, often accompanied by music, at community meetings, conferences, and other gatherings. Now retired after serving in a variety of ministries in the School Sisters of St. Francis, she continues to write and present her poetry, sing in church choirs, and enjoy God’s Word and World.

James Stephen Behrens, OCSO, is a Trappist monk of the Monastery of the Holy Spirit in Conyers, Georgia. His reflections and photographs have appeared in books, including several published by ACTA Publications, and in print and on-line periodicals.

Praise for Sr. Irene Zimmerman and her Poetry

“Irene Zimmerman’s poems are simply astonishing. When I first was introduced to her poetry, I felt that I had never been closer to the Gospels. All I could think of was Emily Dickinson’s comment that a good poem should make you feel like the ‘top of your head’ has been taken off. Sister Irene’s poems, which by turns enchant, surprise, and challenge, invite you to experience, almost first hand, the profound mystery of Jesus’s life on earth. Her poems, in short, make you feel as if you are there. I return to her beautiful poetry as often as I can, and I am always rewarded.” — James Martin, SJ, author of Jesus: A Pilgrimage and The Jesuit Guide