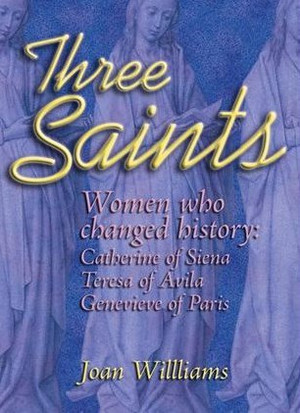 Sainthood often implies personal holiness and a focus on issues greater than the material world, but many saints have made real contributions in public life, and some, such as the women in Three Saints, changed history.

Cultural and religious restrictions often prescribed narrow choices and limited movement for women in early Church and society. Before they could even think about entering the public arena, women such as Genevieve, Catherine and Teresa had to overcome the culturally established mental and physical barriers that restricted women of their time. They plunged into the turmoil of politics and influenced public decisions and actions, keenly aware that such decisions have a real impact for good or evil on people's lives.

Genevieve of Paris
Despite threats against her life, she prevented Parisians from fleeing to certain death when they panicked over a threatened attack by Attila the Hun.

Catherine of Siena
She braved prejudice against women active in any sphere other than home or convent and involved herself in Italian politics of both Church and state.

Teresa of Avila
She challenged the status quo of Spanish society and the Church by defying aristocratic dominance, and she risked the label of heretic by encouraging the practice of "mental prayer."