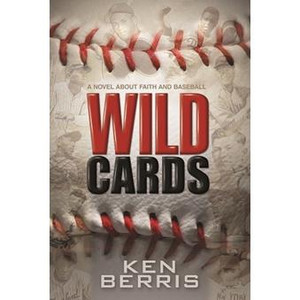 Who hasnâ€™t watched baseball and dreamed of seeing Babe Ruth, Jackie Robinson,Ty Cobb, and Lou Gehrig on the same field as the All Stars of today? So imagine if one day these and other legends of the past showed up alive again, with their destiny in the hands of a young boy, wanting a game with the current major league stars.

A father’s impossible quest to return to his family. A son’s magical journey. A single mother’s heroic efforts to protect her son. And fate’s sleight of hand bringing together baseball’s past legends and today’s major league stars in a game for the ages. Full of hope, drama, humor and non-stop action, Wild Cards is a novel of striking narrative and power. It investigates the mysteries of faith, fatherhood, re-incarnation, and a belief that even baseball plays a hand in our destinies. The perfect gift for the young at heart.

Full of poignant moments and exciting action, it is a novel of striking narrative and power that offers unforgettable characters, hypnotic humor, and breathtaking suspense, while investigating the mysteries of faith, fatherhood, re-incarnation, and baseball. It is a share with your friends jubilation wrapped in a good old fashioned story of belief and hope.

What they are saying about Wild Cards:

"Essentially, the ultimate fantasy for sports fans. Itâ€™s amazing! Itâ€™s crazy! Very cool stuff! Weâ€™re excited about it. I canâ€™t wait until we can talk about this being a major motion picture."

"It is one of the coolest baseball books that I've read. Field of Dreams has always been one of my favorite, favorite movies...but I can tell you that this story is as good or better.  It's a father's journey. It's a motherâ€™s journey. Fascinating book!"

"A home run with any audience. It brought back so many memories of the impact that baseball has had on my family over the generations. Wild Cards will entertain and inform everyone."

"WILD CARDS is a thoroughly enjoyable story about loyalty, virtuosity, faith and baseball that offers readers a great climax which pits the stars of todayâ€”Miguel Cabrera, Clayton Kershaw, Mike Trout, Madison Bumgarner et al.â€”against a teams of legendsâ€”Babe Ruth, Satchel Paige, Roberto Clemente, Jackie Robinson et al.â€”in a game for the ages at Yankee Stadium. The legends have somehow come back to life, and the story appeals to all of us who would love to see Ty Cobb and Josh Gibson take on Madison Baumgarner and David Price."

"Legends come to life in this baseball fantasy tale. A new, imaginative take on how fans connect with their baseball heroes, bringing to life why people love and collect their legendary stories."

"Wild Cards is Harry Potter meets Field of Dreams. It's the essence of Norman Rockwell in today's American polyglot world. It's the sweetness of youth and imagination inspired by our ageless inherent love affair with our National Pastime. Wild Cards is an emotional home run with the bases loaded."

"What a terrific story weaving details of our greatest baseball playerâ€™s lives into a â€˜believableâ€™ happening. Fantasy Baseball from the past at its finest. Baseball fans will love this book."

AUTHOR, OUT OF THEIR LEAGUE

"Faith and baseball? I was expecting a book about the Chicago Cubs. Instead, Ken Berris has given us a story more akin to Field of Dreams. Good. Wholly unexpected."

"Riveting, imaginative, with characters that you won't soon forget."

"For all of those sports fans who argue about who throughout history was better than whom, here is Ken Berrisâ€™ wonderfully imaginative way of asking the question. Wild Cards is a terrific romp through baseball fields and history, igniting readers' memories as visceral as the smell of mown infield grass and the sound of a game on a neighbor's radio. Readers from ages nine to ninety-nine will have a blast."

AUTHOR, TILL DEATH US DO PART