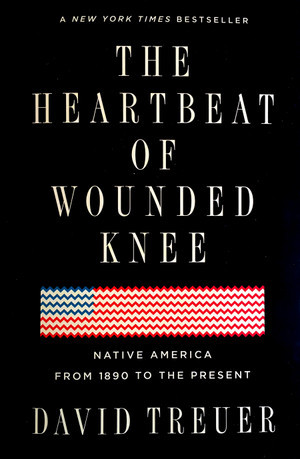 The Heartbeat of Wounded Knee

The long-held idea was that Native American life essentially ended with the U.S. Cavalry's 1890 massacre of more than 150 Sioux at Wounded Knee. Melding history with reportage and memoir, David Treuer uncovers a different narrative, in which the depredations of each era also spawned new modes of survival: The seizures of land gave rise to increasingly sophisticated legal and political maneuvering. The forced assimilation of children at government-run boarding schools incubated a unifying Native identity. Not despite but rather because of American Indians' intense struggles to preserve their tribes, their cultures, and their very existence, the true story is that of a resilient people's unprecedented resourcefulness and reinvention.

By the time I graduated from high school I was ready to leave the reservation and never come back. In my mind, nothing good came from or of my Indian life, and I was exhausted by all the drama and trauma. I was tired of the poverty and the dusty roads that no one saw fit to pave. I was sick of the late-night calls and the trips to the hospital to witness the damage we were doing to ourselves. I looked ahead to the green, leafy excellence of Princeton University, to a future as a composer and Olympic fencer. Nothing was clearer to me than the conviction that my past lay behind me, on the reservation, and the future awaited me beyond our borders, in America, so I left.

As soon as I was gone, I missed it. I missed what I hadn’t known was my Indian life, our collective Indian life. I missed the Mississippi, which flows through my reservation as a tiny thing, little more than a stream. I could walk across. I missed the ways the pine scratched the window screens at night. I missed my uncle Davey’s antics, and I missed his love and I missed how he loved me completely, without judgment, without measure, without censure. I missed the Memorial Day gatherings at the Bena, Minnesota, cemetery with my aunt and uncles and cousins, the sandwiches of canned ham mixed with Miracle Whip and relish and white dinner rolls. The yearning for home was rooted in nostalgia, but I was also trying to grow beyond it, toward a place approaching true knowledge.…

Through it all, I came to see, we Indians often get ourselves wrong. My lack of regard for my own origins and those of my community began to trouble me, and troubles me still. If I could not see myself and my homelands differently from how many non-Indians do—more expansively, more intimately, more deeply—then how could I hope that the future of my people, in the broadest sense, would be any different from the story we kept being told, and kept telling ourselves?

David Treuer is Ojibwe from the Leech Lake Reservation in Northern Minnesota. He splits his time between the reservation and Los Angeles, where he teaches creative writing and literature at the University of Southern California. He is the author of four novels and three books of non-fiction and has written for The New York Times, the Los Angeles Times, The Washington Post, and other publications.

Praise for The Heartbeat of Wounded Knee

“Chapter after chapter, it’s like one shattered myth after another.” National Public Radio

“Informed, moving, and kaleidoscopic… Ultimately, Treuer’s book suggests the need for soul-searching about the meanings of American history and the stories we tell ourselves about this nation’s past.” The New York Times Review of Books