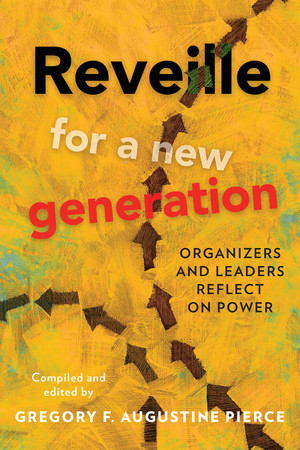 Reveille for a New Generation

You too can do something, you too can make a contribution, you too can get in the way; but if you’re going to do it, do it full and with love, peace, nonviolence, and that element of faith.—John R. Lewis, interview with Krista Tippett for the On Being Project, March 28, 2013

One way to think about power is that organizing is a right, at least in a true democracy. This collection of some fifty stories, essays, letters, poems, sermons, eulogies, and other pieces of writing by leaders and organizers connected either directly or in spirit with the Industrial Areas Foundation (IAF) shows how people in America—from the very beginning to today—have always figured out how to “fight back” and “fight for” against those who would ignore, abuse, or oppress them, their families, their institutions, and their communities. Each entry is accompanied by background information on that writer and three provocative questions for personal reflection or group discussion.

The idea that change usually comes incrementally, over a long period of time, as people build their own power organizations that address the root causes of social problems (“root” being the very definition of the word radical) is newly relevant during the triple-headed crisis we are experiencing in the world today: novel pandemics; growing and unsustainable inequalities of wealth; and volatile racial, religious, and ethnic tensions. To be successful, people’s organizations need to follow the universals of relational power written about so passionately and eloquently by the more than fifty organizers and leaders in this book. Here are a few of those principles.

Read more about this book on the editor's blog: Writing for Community Organizers and Leaders.