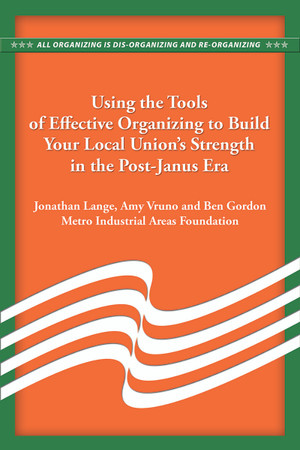 The much-awaited decision by the Supreme Court of the United States in the case of Janus v. AFSCME is going to change labor organizing for at least a generation. But here is a prescription for turning whatever negatives for union locals that might be perceived or expected from Janus into a roadmap for reinvigorating how unions approach and engage their current and potential members and the communities in which they operate.

Authors Jonathan Lange, Amy Vruno, and Ben Gordon—three organizers with 75 years of union and community organizing experience among them—offer five simple but profound tools that unions can use to “dis-organize and re-organize” themselves in the post-Janus era.

Janus could fuel a strong and mature reaction—free of whining and wishful thinking—that is full of clarity of purpose, consistency of approach, and creativity in the field of action. That kind of reaction might well begin to attract new and different allies and partners in the public arena and would mark the beginning of the end of the segregation—often the self-segregation—of labor from the larger community. For all this to be true, labor will need to drop or reduce the use of some of the tools relied upon during the decades of decline and pick up and use another set of tools that have been tested and have proven effective in the early work that Metro IAF and several unions have already begun. — Michael Gecan, from the Introduction