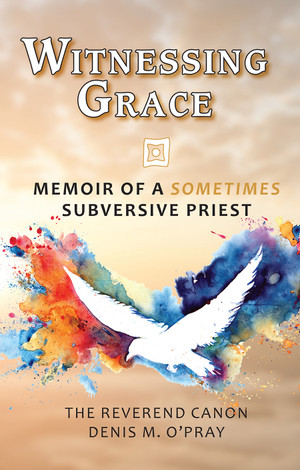 Acts have their being in the witness.
Without him who can speak of it?
In the end one could even say that the act is nothing,
the witness all.
Cormac McCarthy, The Crossing

In this new book of memoirs from his work as a “sometimes subversive” priest in the Episcopal Church for 44 years, Denis O’Pray reflects on his role as a witness: both a witness to the grace and a witness of the grace of God in the daily lives of his parishioners, family, and friends. Witnessing Grace is divided into twelve sections of short epiphanies about what he learned about himself, the church, and the world in the course of his ministry in New York, Minnesota, California, and elsewhere around the United States and the world.

Insightful, emotional, passionate, empathetic, and at times prophetic, Witnessing Grace never falls into the trap of becoming defensive or self-serving. O’Pray is honest, curious, open, loving…and also very funny. As he points out in his Introduction:

Clergy are not exempt from the ego trip of late-life autobiography arising from a quite irresistible notion that the importance of their lives has not been fully appreciated or even understood. Hollywood celebrities and political leaders, often driven by the same impulse, find they have much to celebrate or justify, and they have a built-in audience of curious fans who can never get enough of their stories. Clergy, except for public giants like Billy Graham and Fulton Sheen and Joel Osteen to name a few, have no ready audience for the self-indulgent revelations of a life lived largely in obscurity.

O’Pray instead tries to fill the role of witness in the priesthood in the tradition of George Bernanos in The Diary of a County Priest and more recently of Lutheran priest and former bishop of Manhattan Stephen Bouman in Baptized for This Moment: Rediscovering the Grace All Around Us and of Michael P. Cahill in Catholic Watershed: The Chicago Ordination Class of 1969 and How They Helped Change the Church. “It is a rare event,” he says, “that does not disclose its Godward side to me. I must move with care here; it is far too easy to grab the Godward and look away too quickly, instead of abiding in those moments of the inevitable discovery of grace.”

Here are the dozen topics that encompass the 80 vignettes that comprise Witnessing Grace: My Father’s Story; Now, My Story; Earning the Black; The Making of a Priest; Crossing Borders to Care for Others; Extraordinary People Shape My Ministry; The Inner Circle; Circles Further Out; Lessons from Africa and Beyond; Preaching the Moment; Making Sense of the Senseless; Retirement in Name Only.