Reveille for a New Generation

This blog is an attempt to convince community leaders and organizers that writing can be another tool in their power toolbox. It offers examples and suggestions on how to write both artfully and effectively. I have been a publisher for over thirty years and a community leader and organizer for almost fifty years, so the combination of these two topics is a natural for me, as in this piece.

I have been organizing for 50 years, at times as a paid organizer and the rest of the time as a volunteer leader with the Industrial Areas Foundation (IAF), an organization founded in 1940 by Saul Alinsky which now has 60 affiliated organizations around the country, with a few in other countries as well. I am now the part-time supervisor of the four Metro IAF affiliates in Illinois, in addition to my work as the publisher of ACTA Publications.

The IAF trains people and the institutions they control about what we call “relational power” across the divisions of race, ethnicity, religion, geography, economics, age, gender, sexual orientation, etc. You can learn more about the IAF at www.industrialareasfoundation.org. It has over a hundred full-time, trained organizers and is looking for more. We are especially proactive in recruiting people in their thirties and forties who are interested in organizing as a possible career. (You might even be or know someone who might be interested in this kind of work if so, contact me.)

I periodically offer a workshop on “Writing for Organizers and Leaders.” As part of that effort, I am compiling and editing a new book titled Reveille for a New Generation: Organizers and Leaders Reflect on Power. The book will contain about 50 first-person story-essays of 1000-2500 words and will be divided into three sections. Part One is material prior to the 1940s. It includes reflections on power and powerlessness by people like Frederick Douglass, Sojourner Truth, Lucretia Mott, Emma Lazarus, Lucy Gonzáles Parsons, Ohiyesa (Charles Eastman), Mother Jones, John L. Lewis, Stoyan Pribichevich, and Pauli Murray.

The Afterword or Epilogue (I hope) will be an excerpt from the new book The Heartbeat of Wounded Knee: Native America from 1890 to the Present by Indian (his word of choice) writer David Treuer, an Ojibwe from the Leech Lake Reservation in northern Minnesota. The Heartbeat of Wounded Knee was a finalist for last year’s National Book Awards. I hope his essay will bring my book full circle on reflecting on the question of people’s power and powerlessness from the founding of the United States to the present. 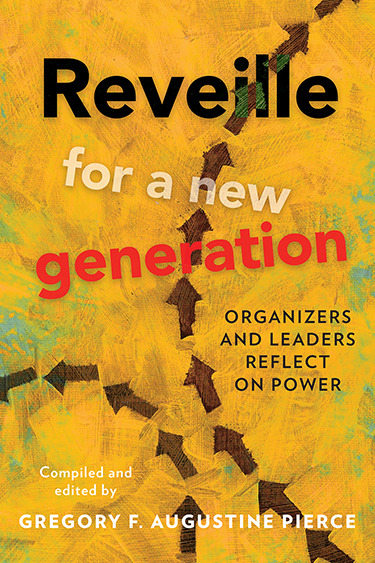 Reveille for a New Generation will be published the day after the presidential election (no matter who wins, it will be very relevant). I will be including excerpts from the book on this blog going forward. Let me know what you think at gfapierce@actapublications.com or 800-397-2282.

Gregory F. Augustine Pierce is the publisher of ACTA Publications in Chicago and the author of many books, including The World as It Should Be and Spirituality at Work. He runs “intensive immersion” workshops on writing for specific kinds of writers, such as the “Writing for Community Leaders and Organizers.” For more information, contact him at gfapierce@actapublications.com or 800-397-2282.

Other Organizing Resources from ACTA