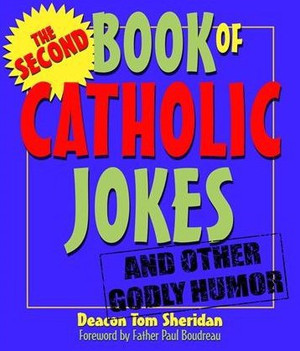 In this follow up to the bestselling Book of Catholic Jokes, Tom Sheridan offers a hilarious collection of clean and well-intentioned jokes designed to spark smiles, laughter, and maybe even a little introspection on the human condition. With a foreword by Father Paul Boudreau, The Second of Book of Catholic Jokes promises to show that faith can be—and should be—fun.

It was Palm Sunday but because of a sore throat, little Jonnie stayed home with a sitter. When the family returned home, they were carrying several palm fronds. Little Jonnie asked them what they were for.

"People held them over Jesus’ head as he walked by," his father told him.

"Wouldn’t you know it," little Jonnie fumed, "the one Sunday I don’t go and he shows up."