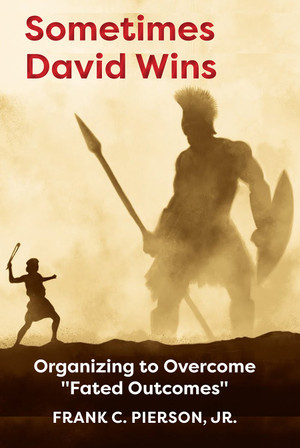 Goliaths of the world, beware!

What you peddle as “fated outcomes” are no such thing. You just want us to believe: “You can’t fight big corporations or billionaires or lobbyists or politicians; our victory is inevitable.” But it’s not; and you know it. Along comes a David or a Davida with his/her/their slingshot, and the power equation suddenly changes — not always, but often enough to make a real difference in the lives of ordinary families and their communities.

Sometimes David Wins is a remarkable book of true stories by community organizer Frank Pierson, who spent a career encouraging and training people to organize enough power to take on the Goliaths that sought to do them wrong. Starting with his own family’s checkered history of involvement in the infamous Ludlow Massacre in Colorado in 1914 and continuing through the founding of community organizations in Illinois, New York, Arizona, Nevada, and Colorado, Pierson weaves his considerable storytelling skills to create a picture of “the world as it could be” if people and their institutions had the ability to bring Goliath down…as a young shepherd in the Bible once did.

Frank C. Pierson, Jr., formerly an organizer and supervisor with the Industrial Areas Foundation (IAF), helped build and sustain institutionally based community organizations across the country while also serving on the national training team and national staff of the IAF for many of those years. Pierson led a series of leadership training sessions for the International Republican Institute in Budapest in 2001 (with Tom Holler, Scott Jacobson, and Ron St. John) and has published many articles about organizing in local and national media and on the websites he manages, www.alinskynow.com and www.democraticfaith.com. His experience includes political and community-building work in Oracle, Arizona, where he lives with his wife, Mary Ellen Kazda.

Frank Pierson has written a compelling book on organizing, using his own unique voice and complex perspective. Raised in the Philadelphia area, Pierson has worked in big cities and small towns around the country, listening long and respectfully to leaders of all kinds and then carefully coaching them — first to build a non-partisan power organization for themselves and then to use it to take on those “Goliaths” who try to exclude ordinary people and their institutions from winning meaningful recognition, respect, and results in the public arena.

Sometimes David Wins has remarkable range in bringing varied and challenging people and places to life. But Pierson’s book also has great depth about his family connection to the early days of corporate dominance in isolated Arizona mining towns and his own connection to Saul Alinsky, the wellspring of community organizing who first learned from the incomparable labor organizer John L. Lewis of the United Mine Workers (UMW) and the Congress of Industrial Organizations (CIO).

If you want to understand how an accomplished organizer wrestles with personal tensions and turns them into fuel that sustains a successful career, this is the book for you. — Mike Gecan, former co-executive director, Industrial Areas Foundation, and author of Going Public and People’s Institutions in Decline

The Goliaths of the world often get first dibs at writing history. In Sometimes David Wins Frank Pierson spotlights the Davids — cheering them on and recognizing them for wielding their slingshots with great precision and effect. Read this book if you’re tired of the constant media stream that only covers government or business or Republicans-v-Democrats. There’s a better way to build our democracy, and this book tells that story. — Adrienne McCauley, co-facilitator of the “Persuasive Writing for Leaders and Organizers” annual workshop and a Metro Industrial Areas Foundation lead organizer